our deepest condolence on the demise of
Com. George Fernandez...(conveyed by PSR at chq ) 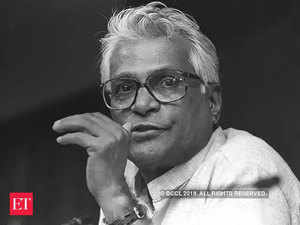 We convey our deepest condolence on the demise of Com. George Fernandez, the dare devil fire brand hero of Indian politics. He expired on 29-1-2019, at the age of 88.
Com. George was a leader rose from the dust. He slept in the pavements of Mumbai city. He worked in hotels and in printing press for livelihood. He organized the taxi workers of Mumbai. The man from Mangalore in Karnataka won elections from Mumbai and then from Bihar.
He was the hero of 20 days strike of Railwaymen in 1974. I regret to observe that even railway comrades forgot him.
George Fernandez was unpredictable, some times. But he created and occupied a space himself in the political arena of India.
Minister George Fernandez was a minister entirely different from other traditional ‘manthris’ of Delhi. I had opportunity to meet him several times in his official residence at 3, Krishna Menon Marg, New Delhi. Minister George occupied a small room and left the rest of that bungalow as an Open House for visitors from anywhere in the country. The compound looked like a dharamsala.
He is no more. We salute Com. George Fernandez.
….PSR…